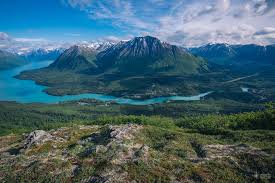 Cooper Landing, also commonly referred to as The Landing, is on the Kenai Peninsula, about 100 miles (160 km) south of Anchorage, at the confluence of Kenai Lake and the Upper Kenai River. The town straddles the Sterling Highway at the north end of Kenai Lake, and although it has only 357 residents, in the summer it swells with anglers, rafters, hikers and bikers enjoying all the beauty that the surrounding mountains offer and the famous Kenai River salmon and trout fishery.

The “Landing” was first settled in the 19th century by gold and mineral prospectors, and is a popular Summer tourist destination thanks to its scenic wilderness location and proximity to the world-class salmon fishery of the Kenai River and Russian River. As of the 2010 census the population in Cooper Landing was 289. 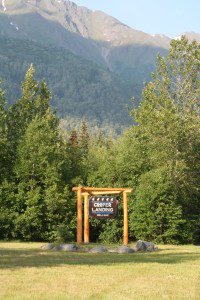 Cooper Landing is strung out for several miles along the Sterling Highway, which connects the Kenai Peninsula with Anchorage and points farther north. The heart of town is a five-building national historic district at Mile 48.7 of the Sterling Highway. In a picturesque setting beneath towering mountains and along the banks of the Kenai River is an old post office, a schoolhouse from the 1950s and a homesteader’s cabin that today houses the Cooper Landing Historical Society Museum. Originally inhabited by gold prospectors in the mid- to late 1800s, these days the community is best known for sport fishing.

Outfitters and guides take their clients away from the crowds in their drift boats to pursue Sockeye and Coho salmon, Dolly Varden and Rainbow trout on the upper Kenai River or sockeye salmon and trout in the nearby Russian River. Anglers enjoy the peace and quiet of the non-motorized turquoise waters and are able to bask in the beauty that surrounds them. Fishermen can also utilize the Russian River Ferry at Sportsman’s for bank fishing, but need to be ready to join in the fishing fever that spikes during peak salmon runs at the confluence of the Russian River and the Kenai. It is at that time of summer that anglers can sometimes stand shoulder to shoulder, casting from the banks in what is commonly referred to as “combat fishing.” 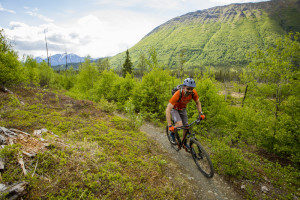 If you’re a hiker or a mountain biker, the Cooper Landing area is paradise. A handful of the best hiking and biking trails in Alaska are located within a few miles. Whether you want steep or flat, long or short, you’ll find them here. Turn of-the-century prospectors blazed these trails and carried millions of dollars of gold over them. The well-marked paths climb through forested valleys to open meadows shimmering with wildflowers and gem-colored lakes. Most trails in this vicinity follow rushing streams into high country with scenery on par with the most beautiful parks of the Lower 48. Bridges make it one of Alaska’s few regions where you can keep your socks dry.

If you want to see bears in July, hike or ride the Russian River Trail. If you want to go into wide open high country dotted with lakes and green mountainsides, consider the Johnson Pass Trail. Looking for a steep, thigh-burner and some exciting downhill action? Try Carter Lake. There are so many choices, you could spend a week here, and not get your fill. 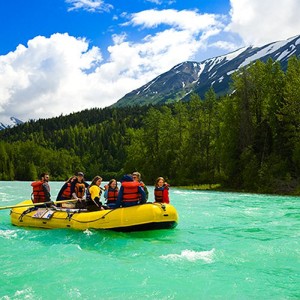 Cooper Landing is also a popular starting point for raft trips down the Kenai River with a number of outfitters offering scenic raft trips ranging from gentle floats to thrilling Class II – III whitewater in the Kenai Canyon. After a day on the water, anglers, rafters and hikers alike can return to Cooper Landing, which features a wide range of comfortable lodging, excellent restaurants and other visitor services.